The languages of African literary prizes 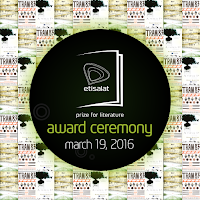 The awarding of the annual Etisalat Prize for Literature today (March 19) is an opportunity to take a look at several ongoing continent-wide literary prizes* for African authors and writing, with attention to the languages they acknowledge. As a general rule, such awards only consider writing in (or translations into) Europhone languages, including 7 of the 8 profiled below. One explicitly accepts writing in an African language - Swahili.


The Etisalat Prize, now in its third year, was created in 2013 by Etisalat Nigeria, a branch of the UAE multinational, Etisalat. It is open only for books published in English (or in English translation from another language).

The winner of the 2015 Etisalat Prize for African Literature announced today is Fiston Mwanza Mujila, for his novel Tram 83, which was originally published in French and translated by Roland Glasser (evidently the prize originally did not consider translations).


Babishai Niwe, formerly Beverley Nambozo Poetry Award, is currently offering two awards to African poets, one for haikus in English only, and another for poetry  in English or in "local languages ... if English translations are sent alongside them."

The awards were begun in 2009 with only Ugandan women eligible. Beginning with the 2014 awards, men and non-Ugandan Africans could also submit entries.


The Brunel University African Poetry Prize recognizes African poets, and is awarded for poetry in English or translated into English. It was established in 2013 by British-Nigerian writer Bernardine Evaristo and is sponsored by Brunel University London with other British and US partners.


The Caine Prize was established in 2000 in the UK, and is "awarded to an African writer of a short story published in English." Stories translated into English from other languages and published are eligible. The prize is named after Sir Michael Harris Caine.


The Golden Baobab Prize is awarded to African writers of literature in English for children and young adults (there are three age categories). It was established in 2008 by the Ghanaian NGO, Golden Baobab Foundation for Education.


The Grand prix littéraire d'Afrique noire was first awarded in 1960 and recognizes African writing in French. It is managed by the Association des écrivains de langue française. The prize actually began in 1926 under a different name.

The prize was founded by Mukoma Wa Ngugi and Lizzy Attree. It is "primarily supported" by Mabati Rolling Mills of Kenya and Cornell University.

The prize focuses on a different genre of literature for each award, such that drama was considered in 2014, poetry in 2016, and prose in 2018.
* Prizes no longer offered, like the Noma Award for Publishing in Africa, which at one time was prominent, and prizes whose scope is not limited to Africa or African authors, are not considered in this list. I had trouble determining the current status of the Penguin Prize for African Writing, which was started in 2010. Unfortunately, Indiana University's African Literary Awards Database is not currently available for reference.
Posted by Don at 23:47 2 comments:

Email ThisBlogThis!Share to TwitterShare to FacebookShare to Pinterest
Labels: literature 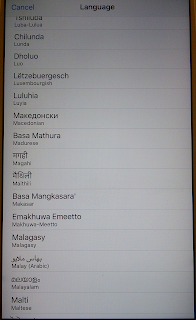 Here is an updated list of African languages on iPhone 6s+, with six more languages: Lunda, Luo, Makhuwa, Teso, Timne, and Tsonga. Given how these are bunched, it is possible that I missed them in compiling the previous list (posted last December). In any event, there are now 80 in total, all in the "Other languages." None of them are present as iPhone languages - which means that support needs third party apps.

Four important languages I noted missing from the list last time are still not on it: Amharic, Hausa, Kongo, and Tigrinya.

The new list follows, with the language names listed alphabetically (using the English versions on iPhone). Two languages are listed in two script: Soninke (in Arabic and Latin) and Vai (in Latin and Vai). Links in the list are mainly to Wikipedia articles. As before, any errors or omissions are mine, and I would appreciate any observations concerning accuracy:

From February 28 through March 5, 1966, a group of noted linguists and African language and literacy specialists from Africa and the North gathered in Bamako, Mali for a UNESCO-sponsored "expert meeting" on "unification of alphabets of national languages."1,2

In a posting two years ago - "See you in Bamako in 2016?" - I discussed some reasons why it would be useful to revisit issues of harmonizing orthographies of African languages on the 50th anniversary of the meeting. Here I will focus mainly on the 1966 event itself.


This event was apparently the outcome of two processes, one being a proposal made to UNESCO's Executive Board by Amadou-Hampaté Bâ, Mali's representative to that body, to consider the issue of African language transcription, and the other a set of recommendations on the same topic by the 5th West African Language Conference held in Accra in April 1965.3 It also followed UNESCO-sponsored conferences on literacy held in Abidjan and in Ibadan, both in 1964.


The meeting in Bamako actually focused on six West African languages - Fula, Hausa, Kanuri, Manding, Songhay-Zarma, and Tamasheq - and on the Latin-based transcriptions for them. According to the report, the choice of languages was based on two criteria: (1) the language must be "officially recognized for adult literacy work in more than one Member State"; and (2) linguistic study of the language must be "sufficiently advanced to enable the work to proceed rapidly." There were a few subsequent expert meetings focusing on other groups of languages in the region, and most significantly, a meeting in Niamey in 1978 with more of a continent-wide mission of harmonizing African language transcriptions.

The Latin transcription of African languages actually has a long history, much of it traced back to missionary work in the late 19th century, but one of the dynamics has always been the tendency on one hand to develop special orthographies, even sometimes within the same language, for the phonetic systems encountered, and on the other hand to try to develop a unified system, even to the extent of covering many languages. This meeting is obviously in the latter category, building on earlier efforts, such as the IAI alphabet (1928, 1930).

One of the ways in which the Bamako meeting was significant was in facilitating discussion and agreement among several countries, including both Francophone and Anglophone states. In particular the orthographic conventions adopted in Nigeria for Hausa and Fula (including the so-called "hooked letters," in particular, ɓ, ɗ, and ƙ).

Some of the conventions discussed in the meeting, such as the hooked letters above for Hausa and Fula, and the letter ŋ ("eng") for for several languages have endured through the development of the African Reference Alphabet in Niamey. Several digraphs retained for Manding languages - dy, kh, nw, ty - and use of diacritics (accents) for open vowels were later dropped in favor of single letters and extended characters. (The "dy" has lived on, however, in the spelling of "Dyula.")

So the importance of the Bamako expert meeting was not necessarily in the specifics, but in advancing the process of developing standard orthographies for major African languages used in multiple countries.


The road not taken: Ajami and Tifinagh


Prior to European penetration and colonization of Africa, a number of languages of West Africa including most if not all the six discussed in Bamako, were written with an adaptation of the Arabic alphabet called Ajami. (The Arabic alphabet was also used on the East African coast and islands.)  There was apparently no interest on the part of colonial or post-independence authorities to develop these systems.

Among the reasons one might discern for such (non-)policy probably was the fact that resources were much more readily available for use of the Latin alphabet. One has only to look at Guinea's departure from the Bamako consensus to establish a Latin-based orthography using only the letters and diacritics one could type with typewriters of that epoch - no hooked letters or eng - to see an example of how central such practical limitations can be. (Guinea later harmonized its system with the rest of the region.)

Little surprise then that for Tamasheq, the ancient but locally used Tifinagh script was not entertained for literacy and other work.


In the years since the last major meeting focusing on harmonizing transcriptions - the expert meeting in Niamey mentioned above - we have of course seen revolutions in computing, how text in various scripts can be managed, and increasingly in human language technology. The standards fostered by meetings such as those in Bamako and Niamey have been helpful in the facilitating the informatisation of African languages.

However on country levels, orthographic rules for the same languages still vary. And now there are a number of new alphabets that, in the case of N'Ko for example, are popular among significant populations. And use of the older systems of Ajami and Tifinagh are facilitated with information technology.

So, in light of these complex realities and changing needs, the possibility of a new meeting that I brought up two years ago with regard to the 50th anniversary of the Bamako expert meeting still seems valid. Would a conference on African language transcriptions and technology be useful, as a way of taking stock and taking account of new developments? And would the 40th anniversary of the Niamey meeting in 2018 be a good time for it?
1. The report of the meeting is available in original French (as image PDF and as HTML on the Bisharat site) and in English (image PDF).
2. Note in the title the use of "national language," a term that has been discussed previously on this blog. See in particular: "Ethnologue and 'national languages' in Africa" (5 Dec. 2013); "Ethnologue: 'National' and 'Principal' languages in Africa" (14 Oct. 2014); "'Community' & 'national' languages in African contexts" (11 Nov. 2015).
3. That same Congress in Accra, part of a series organized by the Survey of West African Languages, also founded the West African Linguistic Society.
4. I thought it interesting to link the names where possible to bios or other webpages with information about these individuals. In some cases, however, this was not possible.
Posted by Don at 00:00 No comments: