It is not my intent to list all bilingual Hausa & Chinese materials, but with this and the previous post on this topic, hope to call attention to how much has been done in this area, as well as a persistent font issue familiar to many of us who have dealt with African languages in extended Latin orthographies.
Posted by Don at 23:51 No comments:

African Language Technology (AfLaT) and Traitement automatique des langues africaines (TALAf) are associations that promote collaboration and on use of a range of advanced technologies with African languages. In some ways they serve as sister entities, one using English as its primary working language, and the other French.

Brief profiles of each will follow, but first I'd like to call attention to TALAf's current call for participation in the upcoming TALAf 2016 workshop (deadline extended to May 8). This is scheduled as part of a larger event - three co-located language and technology conferences dubbed JEP-TALN-RECITAL 2016 - to be held at INALCO in Paris on July 4-7.


AfLaT was set up in 2006 by Guy De Pauw, Gilles-Maurice de Schryver, and Peter Waiganjo Wagacha. The AfLaT website is intended to catalogue language technology research projects such as "digital corpora, dictionaries and tools for many (formerly) resource-scarce African languages" in the form of bibliographic resources, web links and tools, which have been provided by AfLaT members (registering as a member is free). It has organized a number of workshops since 2009.


TALAf began with a workshop in 2012 with Mathieu Mangeot and Chantal Enguehard among the organizers. TALAf describes itself as a community of researchers interested in natural language processing of African languages, and seeks to promote collaboration in development of tools and resources. It organizes biennial workshops, runs an email list, and is associated with other projects such as DiLAF : dictionnaires langue africaine-français (bambara, haoussa, kanouri, tamajaq, zarma).

A couple of quick observations about links between Hausa language and Chinese (Mandarin), with attention to China:
I plan to go a little more in-depth on African languages and Chinese in a future post - and should note in that context that Swahili is the African language (other than Arabic) with the most connections with Chinese - but for now would note that there is a number of materials for Hausa speakers to learn Chinese, and for Chinese speakers to learn Hausa. Although I have not yet found a bibliography of such materials, responses to a question on the Chinese in Africa/Africans in China (CA/AC) list, and an internet search focused on Hausa and Chinese have yielded information on some items (the latter beginning with images, which is unusual from my web-searching experience).


The image on the top right, for Sinanci na Zamani - 当代中文, is for one of a set of materials (see here for another) for learning Chinese from Hausa - the title translates as Modern or Contemporary Chinese. 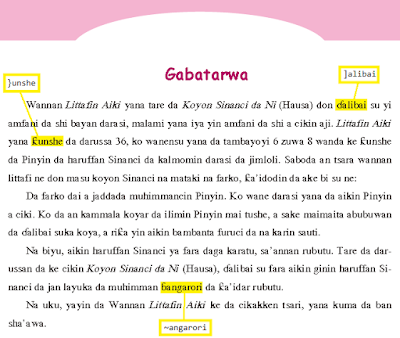 I received divergent assessments of availability of Chinese learning materials for Africa in African languages, with one reporting for instance that Confucius Institutes create local language materials on their own, and another suggesting that materials and teacher skills mainly in English might be limitations of the Institutes. In follow up research, however, I found PDFs of a book chapter introducing the Chinese pinyin system in Hausa, and a chapter on basic conversation (the latter includes the title "Kuaile Hanyu" in the page footers), both on the Confucius Institute's website, Hanban.org (it is not clear that either of these is part of the Sinanci na Zamani series mentioned above).

That doesn't necessarily mean that these materials are used in Confucius Institutes - they could be used in schools. (I would mention here that I heard from another source that a private Chinese language school in Niamey, Niger taught from French, and used neither Hausa or Zarma.)

One technical note on the production of both of these Hausa-Chinese chapters found on Hanban.org pertains to hacks used for extended Latin characters used in both Hausa (the "hooked letters" ɓ, ɗ, and k) and Chinese pinyin (vowels with tone marks). The image of "Gabatarwa" (introduction) above "reveals" the coding behind the hooked characters in the PDF: } = ƙ;  ] = ɗ; ~ = ɓ. This is similar to the pre-Unicode 8-bit font hacks like we had to do for the Fulfulde lexicon a quarter century ago, or have been done with fonts like Bambara Arial also in the 1990s. In fact, it appears to be the "ANSI" encoded (8-bit) font "AbdallaUbaAdamu-regular" that is the source of these substitutions (one source indicates this font was created in 1996).

What is more surprising is the many such substitutions done for tone-marked vowels in pinyin, all of which have had Unicode codepoints for years now. (For a quick look, see the Google cached versions of one and the other of the two chapters mentioned above, which show the actual characters that have been hacked for hooked consonants or toned vowels). Either the documents are rather old or their creators were not "Unicode savvy" in an expression that itself is dated.


Although there must certainly be a significant number of materials for Chinese speakers learning Hausa, given that Hausa has been taught for many years at Beijing Foreign Studies University, my quick searches have not come up with a lot. One book that did come up in several searches is Harshen Hausa - 豪萨语 (Hausa Language; see image of cover on right).


I was told about one dictionary for young Hausa speakers learning Chinese characters - 汉语图解小词典（豪萨语版）/ Ƙaramin Ƙamus Na Sinanci Da Hausa Cikin Hotuna - and in the course of researching found some others. Notable among them is one listed on the Hanban.org site: 汉语豪萨语分类词典 Ƙamus na Sinanci zuwa Hausa (A Classified Chinese-Hausa Dictionary; image on left). Published in 2013, it is also available for Kindle and as iBook and App. I also found proofs for the first few pages of a dictionary (image PDF; not clear what publication it came from).


I came to this subject with modest expectations, which were more or less confirmed by responses to the question I posed on the CA/AC list (thanks again to those who responded offline to my question). However as I looked into it further, it seemed that there is much more happening. In addition to materials, it bears mentioning that what I understood as plans for Hausa dubbing of Chinese films have already started (more on that in another post).

The 8-bit vs. Unicode font issue mentioned may already be resolved. Assuming it is, the lessons learned might be applicable to China Radio International's Hausa service web content.

This very quick survey is just a start and doubtless has missed much. I hope to come back to the topic as indicated above, in a broader Africa-wide look at connections between Chinese and African languages.

African Languages in the Disciplines 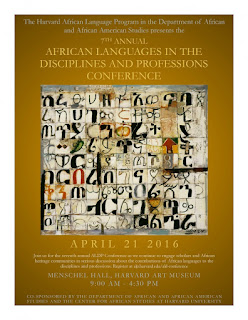 A full step slow on this as I've been occupied with other matters, but yesterday and today (21-22 April 2016) the Harvard University Center for African Studies held the seventh African Languages and the Disciplines and Professions Conference (the "and Professions" part of the title is new with this edition).

The permanent page on the event carries this description:

The ALD Conference aims to engage a diverse range of scholars and African heritage communities in serious discussion about the contributions of African languages to the disciplines.

Indigenous African languages are vital to comprehending how Africans understand, organize, and transmit essential knowledge to successive generations, both through oral and written traditions and through aesthetic practices. African languages play a critical role in research as they serve as road maps for identifying how African social, political, and economic institutions change over time. The ALD conference provides a platform for diverse scholarly discussions about the contributions of African languages across a variety of disciplines.


The schedule of the just completed conference featured a keynote by Kenyan author and scholar, Ngugi wa Thiong'o:

For the record, here is a list of the previous six conferences in the series (all but the first two of the linked pages show the conference schedules):
The premise of this conference is important as it highlights the relevance of the first languages of Africa throughout the curriculum outside of the language classroom, in research beyond linguistics, and practice beyond communication.