Last year I posted on whether Unicode and internationalization (i18n) is included in any computer science curriculum in Africa. A recent comment to that post by Andre Schappo asking whether there are any organizations in Africa promoting internationalization of university curricula more generally offers another angle to approach this issue.

Andre's question follows a post on his blog about two organizations that promote internationalization of teaching curricula, one in the UK and the other in Australia. Depending on how one defines promotion of internationalization in higher education, one might add many other initiatives and consortia which seek in one way or another to develop and support international or global studies. The degree to which such efforts overlap with or might impact the content of computer science courses is an interesting question. In my limited experience, international/global studies mainly addresses disciplines in other areas (social sciences, humanities, certain applied disciplines). It certainly is worth asking how a program of internationalization at a university would apply to computer science and see how the discussion goes.

However, in the case of Africa - and also Asia - internationalization of the computer science curriculum would seem to follow as much from attention to localization as to international and global perspectives.

In any event, this issue of how Unicode and i18n figure in computer science instruction - worldwide as well as in Africa - is one that is important for technical and language planning reasons as well as for the same reasons that motivate attention to internationalization in the higher education generally.

One of the most common objections I have heard from international development colleagues about literacy training in African languages is "What will they read?" While it is true that relatively little is published in some African languages, and next to nothing in others, such a view has problems on several levels. For example, it's easier to learn in one's first language, literacy skills in one language facilitate learning other languages, and there is a cultural cost to always and only associating formal learning with a Europhone second language. But one of the most important in my opinion, and one that I have offered as a primary defense of literacy in first languages of Africa, is that neo-literates* can write - maybe just a little, like a ledger, or maybe a lot, in stories that express and communicate in their own way.

So it is a pleasure to see the theme for this year's International Literacy Day (ILD; 8 September 2016): "Reading the Past, Writing the Future."

Are there examples of newly literate people in Africa writing in African languages? Yes of course. One is the Senegalese organization Associates in Research and Education for Development (ARED), which has actually published writing by its students. I have also heard of literacy students just writing with this new tool. There are certainly many more.

With the association of literacy with goals of "lifelong learning" - per the 2030 Agenda for Sustainable Development - there should be a way to support and encourage neo-literate writing in first languages on a wider and more systematic basis. Not just for fun, though hopefully at least that, but for adding many diverse voices to writing the future.


Two African organizations were recognized this year with the UNESCO Confucius Prize for Literacy (which along with the King Sejong Literacy Prize are awarded annually on ILD):
Both programs sound interesting. I'd like to know more about how the Senegalese program used its national languages (and which ones) in ICT.

For a very interesting discussion of ILD from Malawi, see Steve Sharra's blog, Afrika Aphukira: Literacy, Language and Power: Thoughts on International Literacy Day 2016
* "A neo literate is an individual who has completed a basic literacy training programme and has demonstrated the ability and willingness to continue to learn on his or her own using the skills and knowledge attained without the direct guidance of a literacy teacher." APPEAL - Training Materials for Continuing Education Personnel (ATLP-CE) - Volume 2: Post-Literacy Programmes (APEID - UNESCO, 1993, 112 p.)
Posted by Don at 07:10 1 comment: 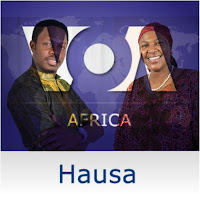 The Voice of America (VOA) is hiring a Digital Content Editor for its Hausa service. Normally I do not post jobs on Beyond Niamey, but rather do so occasionally on the Facebook African languages group. In this case I am making an exception since it seems that the person hired by VOA will be in a position to possibly help the organization finally move its Hausa web content from an ASCIIfied version to the Boko orthography - a topic that has been discussed previously on this blog.

Links to the position announcement are below, but first a quick review of the issue. The Latin-based "Boko" alphabet for Hausa includes several modified letters (technically called "extended characters") that stand for sounds not represented in the alphabet as used in English, French or other European languages. Sometimes called "hooked letters" they include: ɓ ; ɗ ; ƙ ; and in Niger, ƴ - in Nigeria 'y is written for the same sound as the last one. The capital letter forms of the four hooked letters are Ɓ Ɗ Ƙ Ƴ.

When VOA and other international radio services - notably BBC, CRI, and RDW - began websites for their respective Hausa services, the Unicode standard that facilitates display of extended Latin characters and diverse writing systems on the internet, was not in widespread use (RFI added its Hausa service later). Evidently this was the reason for resort to an ASCIIfied rendering of Hausa text (with b, d, k, and y instead of the hooked characters, which can change meanings) - older systems then in use among the audience may not have been able to handle the Unicode-encoded hooked letters.

That argument is losing credence, if it is not already meaningless. The number of systems in use old enough not to have Unicode fonts (now the norm but the earliest of them were already in systems over a decade ago) must be very few. Moreover all the 5 international radio Hausa sites use UTF-8, which displays Unicode.

So what is the current state of use of the Boko orthography (with the hooked letters) on the five sites - VOA, BBC, CRI, RDW, and RFI? I used a new way of evaluating them - actually bringing back an old trick - which is to search just the letters on the sites with Google. The best way is to use Google advanced search, or just put a sequence like this in the search window of the usual Google page:


This pulls up all pages on the site with at least one of these hooked letters. You can substitute the domain of the site you want to evaluate. My results were: BBC 16 pages; RDW 7 pages; VOA, CRI, and RFI all 0. Not impressive.

What's holding them back? Inertia? Lack of a keyboard layout to easily type with the hooked letters? Lack of a spell checker for Hausa in Boko orthography?

In any event, the new Digital Content Editor for the VOA Hausa service would be in a position to make a significant contribution to that service's web content, with secondary effects on other Hausa language websites.

The position has two listings on the USAjobs.gov site: one for US citizens; and one for non-US citizens. (This sort of dual listing is normal; you see it also sometimes for internal candidates in an agency and for external candidates applying from outside the agency.) The position was announced today, 9/6/16, and closes 9/20/16.

In his recent visit to Lagos, Nigeria, Facebook founder and CEO Mark Zuckerberg indicated that Facebook will add more African language interfaces. Meanwhile, at the African Peering and Interconnection Forum (AfPIF2016) in Dar es Salaam, Tanzania, the Internet Society (ISOC) released a report entitled "Promoting Content in Africa," which highlights the importance of internet content in African language for full access by Africans.

These two developments concerning on the one hand localization of the software for a popular social media platform, and on the other hand the creation of content, highlight the dual aspects of Africanization (A12n) of information and communication technology in/for Africa. As these processes develop, it would be useful for to find ways to integrate them as appropriate, and foster collaboration among organizations and individuals involved in either or both. (That was the intent of the African Network for Localisation, ANLoc, albeit with a focus mainly on the software and enabling aspects.)

It is possible, as the ISOC report notes, for content to be developed or translated in a language even when the software on which it is created is not localized in it. And that certainly would be the case for the less widely spoken languages, at least in the near term. However, the availability of software interfaces - whether for social media like Facebook or for production software - in at least the major African languages, would probably help even for the less-spoken ones.

One of the contributors to the ISOC report, Dawit Bekele, who is ISOC's African Bureau Director, was a participant in the PanAfrican Localisation Workshop in Casablanca, June 2005, and the Pan African Research on L10N Workshop & Localization Blitz in Marrakech, February 2007.