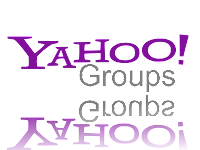 Yahoo's decision earlier this month to cease hosting user-created content and archives of its Yahoo! Groups appears to mean a loss of another sliver of internet history, including substantive discussions about African languages. At a time when technology is being used to collect data in massive amounts, even on trivial matters, this seems hard to justify in the way it is being done, even if one understands the bottom-line calculations of Yahoo corporation.

Two immediate issues faced by the people connected with each Yahoo Group are whether and how first to preserve their group's message archives and other content, and second to continue the group as a list with another host. So I wanted to highlight a number of Yahoo Groups that deal (or dealt) with African languages in one way or another, and which will need help at least for permanent archiving before Yahoo pulls down the content in about 6 weeks (14 December 2019).

In this post I'll simply list a few of those that most interest me personally, with year of creation, number of subscribers, number of messages, and brief description. I may return to several of those and others in subsequent posts, all in the interest of preserving at least some of this history, and raising interest in archiving content in a way that makes it useful for future discussions and research. Keep in mind that the links in the list below will no longer function after 14 Dec.:
I am aware of several possible ways of archiving Yahoo! Groups or transferring them to a new host. Any strong recommendations concerning one or another would be welcome.