On the eve of IDIL, some reflection

Just a quick signal at the end of 2021 to say that I hope to resume posting here intermittently in 2022, which also will be the first year of the International Decade of Indigenous Languages (IDIL).

The place of African languages among indigenous or autochthonous languages - whether all of the first languages of the continent are included, or only some, and by what criteria - seems to me to still be an open question. I've explored that question in 4 posts on this blog, in case any of them might be of interest:

Although my schedule permits much less space than I would like for research and writing, and I am balancing pursuit of other interests as well, I remain keenly interested in African languages and their use in education, development programming, and advanced technologies. The next decade may be critical for the future of African languages, as language technology quickly advances with or without them, and the dynamics of inter-generational transmission of them change or even break down.

At the same time, I have been reflecting on what are and aren't appropriate roles for non-Africans in advocacy for, and pushing our ideas about, African languages. It is not as if these issues have never occurred to me, but observing the field and the general tendency of outsiders, especially of relatively privileged background, to populate all sides of any discourse on Africa, I needed to take a step back.

This is not to backhandedly call into question all people from one culture who propose to do work relating to another culture - in fact, all cultures, and the world in general, needs such diverse perspectives. However, between my part of the world and Africa, there are asymmetries of influence. So I am taking a moment to reflect on those, and how what I think I've been doing benefits from them, and what might be the inadvertent messages and unintended effects of that work.

Other than that, all is fine, Yerkoy sabu.

Email ThisBlogThis!Share to TwitterShare to FacebookShare to Pinterest
Labels: IDIL 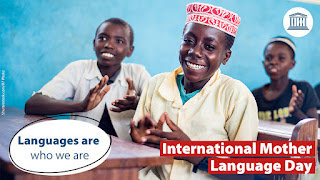