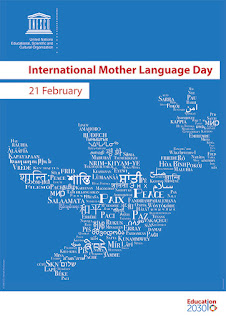 On this International Mother Language Day 2019 (IMLD 2019), which has as its theme "Indigenous languages matter for development, peace building and reconciliation," a question: What are "indigenous languages" in Africa?

The question arises also since we are over a month into the International Year of Indigenous Languages (IYIL 2019), an observation declared by the United Nations General Assembly in its 2016 resolution on the Rights of Indigenous Peoples. The purpose of the IYIL 2019 as stated in that resolution (under #13) is:

I won't propose a definitive answer as to what counts as "indigenous language" as my understanding is that the themes of IMLD and IYIL are inclusive, but it seems to be an important issue to think about in the interests of encouraging wide participation in Africa.

With that in mind, it is worth noting that the South African Centre for Digital Language Resources (SADiLaR) calls for "Celebration of South African languages" in the context of IYIL 2019. Also of interest is that the January-February issue of the UNESCO Courier, themed "Indigenous Languages and Knowledge (IYIL 2019)," has an article on the Mbororo people of Chad, whose mother tongue is a variety of Fula (Fulfulde/Pulaar) - a language that originated in a region far to the west.

Some of the broader issues concerning indigenous languages of Africa I hope to come back to in a following article, but in the meantime wishing all a happy IMLD 2019!