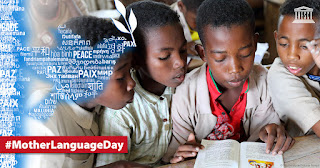 The theme of this year's International Mother Language Day (IMLD2020; 21 February 2020) - "Languages without borders" - seems especially appropriate for Africa. So many (almost all?) African languages - or more accurately, populations having a common mother tongue - are divided by borders established during the colonial period (and prudently maintained in the interests of peace). And people on opposite sides of these borders continue to use their languages, which former Malian president Alpha Oumar Konaré once referred to as "sutures" linking neighboring African countries.

The African Academy of Languages (ACALAN), has had structures in place for some years to work on African "cross-border vehicular languages," which are larger in numbers of speakers and geographic extend of use. In her message on the occasion of IMLD2020, UNESCO Director-General Audrey Azoulay calls attention to all cross-border languages - all mother tongues that cross borders:


For IMLD 2020, UNESCO has chosen the theme of languages without borders to draw attention to the way in which all languages, including mother tongues, contribute to intercultural dialogue and peace. Indeed, throughout the world, numerous cross-border languages bring their speakers closer to one another, turning borders into bridges instead of barriers.

40% of people not educated in mother languages


In  her IMLD2020 message, Mme Azoulay also calls out another fact that is particularly relevant to Africa:


Moreover, mother tongues are valuable allies in our efforts to achieve quality education for all. In fact, as UNESCO studies have shown, studying in a language which is not one’s own interferes with learning and increases inequalities. Yet according to the most recent estimates, 40% of the world’s citizens find themselves in this situation. Bilingual or multilingual education based on students’ mother tongue not only encourages learning, but also contributes to understanding and dialogue among peoples.


As with all IMLDs, we hold out the hope that this observance may inspire more progress in use and development of the diverse languages that are productive and charished parts of our common human heritage.