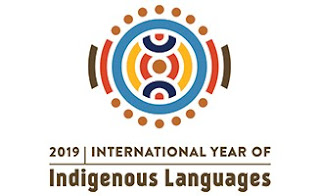 As a follow up to the post about the African Regional Meeting for IYIL2019 (30-31 July 2019), I'd like to take a quick look at what "indigenous language" means in Africa. This is a fundamental question, and one of the broader issues regarding the International Year of Indigenous Languages (IYIL2019) that I mentioned in an earlier post on the Year in Africa.

On the one hand, all African languages - or at least those in language families native to the continent - can be understood as "indigenous" (or the near-synonym, "autochthonous"). On the other hand, "indigenous languages" is a category associated specifically with "indigenous peoples," which in Africa is defined more narrowly by the Indigenous Peoples of Africa Co-ordinating Committee (IPACC).

It does not appear that the African Regional Meeting for IYIL pronounced on this topic one way or another (and perhaps they didn't see any need or advantage in so doing, or perhaps something is forthcoming in a report). And for this post, it is not my place to argue one way or another. However I will in the following share a couple of definitions, and discuss how the term is treated in the the work of the United Nations (UN) and its Permanent Forum on Indigenous Issues (UNPFII), and discuss some considerations relevant to understanding indigenous languages in Africa. In a follow-up post, I'll look at how the term "indigenous languages" is being used in Africa and in writing about the continent.

Definitions and other indications


In global perspective, two definitions of "indigenous language" which parallel the wider and narrower conceptions mentioned above regarding Africa, are:
Although I have not seen an authoritative definition of what counts as an indigenous language (and what doesn't), I understand that it is the second definition above that is operant in the UN and international work.

A backgrounder entitled "Indigenous Languages" by the UNPFII discusses indigenous languages in the context of indigenous peoples but doesn't offer a definition. The UN Economic and Social Council (ECOSOC)'s Resolution 2000/22 establishing UNPFII almost two decades ago does not mention languages or linguistic issues.

The UN General Assembly resolution 71/178 on the Rights of Indigenous Peoples (2016), in which the IYIL2019 was declared, similarly does not give a specific definition for indigenous languages. The mentions of languages in this resolution - eight in total - are as follows (italics from original; bold added):
The impression I get is a clear association in this resolution of indigenous languages with indigenous peoples. There is also a wider concern with endangered languages, a category that covers many tongues among languages of indigenous peoples, as well as many others. In addition, the issues raised in the "Bearing in mind" clause concerning women and youth are similar to those raised in many development scenarios, beyond peoples strictly defined as indigenous. So maybe the definition is somewhat flexible?

None of this is to question the value and need for focus on the situation of indigenous peoples including their languages. This inquiry is instead intended to understand if there is room for a wider conception of indigenous languages in Africa - whose many languages, even more widely spoken ones, are under pressure - within the framework of IYIL2019.

One interesting case is that of the Mbororo Fulani, a (semi-)nomadic people in the eastern Sahel and northern central Africa. They are considered an indigenous people (Hindou Oumarou Ibrahim, a prominent indigenous activist from Chad, is Mbororo). Their language, however, is a variety of Fula (Fulfulde, Pulaar, Pular) spoken by various groups of Fulaphones across many countries of West Africa. So in the narrower sense of the term, is Fula an indigenous language, even though it clearly is widespread and not endangered?


Another issue is are there African languages that would not be considered "indigenous languages," even under a broad definition of the latter? That might include languages like Malagasy, Arabic, and Afrikaans, which are languages of communities established in Africa centuries ago. So too might pidgins and creoles, which grew up in Africa, but with foreign as well as local elements.

This too is exploratory, since there is also no clear definition of what is not an indigenous language in Africa (apart the obvious case of the Europhone languages used officially in most of its countries).

A new definition of "indigenous language"?


Before moving on, I'd like to suggest an alternative way of framing "indigenous language" that flips part of one of the definitions shared above (changed part in italics):
This is not without its own problems - for example how to accommodate Yoruba-speaking descendants of slaves in Brazil, Fula speaking descendants of slaves in West Africa, and smaller communities in the modern diaspora who continue to use their languages. However, the advantage here is emphasizing the locality of many languages, which we might call indigenous, and which in any case have not been spread through the projection of power.

Africa's linguistic terrain is in some ways a difficult fit for the narrower definition of indigenous languages, but the broader one also seems to raise questions.

In the next post, I'll share some ways the term "indigenous language" is currently used in and about Africa.
Posted by Don at 15:55