Working on preparing the PanAfrican Localisation (PanAfriL10n) wiki for relaunch, I recently returned to one particular reference - a 1985 UNESCO document and its use of two terms which have meanings in Africa that differ somewhat from mainstream (Western) definitions: "community language" and "national language."

The document in question is: UNESCO Regional Office for Education in Africa, 1985, African community languages and their use in literacy and education: A regional survey. A wikified version of its Appendix 1 presenting 159 African community languages is included in the wiki. The publication covers quite a bit more than that and despite its age it is well worth the attention of anyone interested in language planning in Africa.


It was the UNESCO document's definition of "community language" - for which there is also a page on the wiki - that had me opening it up again for the first time in years, and then looking up other definitions for comparison. First of all, the term as used by UNESCO evidently came out of a Subregional Seminar on National Languages and Teacher Training held in Dar es Salaam in 1979, itself also funded at least in part by UNESCO. Community language is defined as:


the dominant and general means of communication in a district or province or similar large area ... which serve[s] the purposes of general communication over fairly wide areas within countries....

In this sense, a community language is a widely spoken first language and may also serve as a local lingua franca - quite common in many African societies. Contrast that with the definition from Dictionary.com:

This usage apparently emerged in the mid-1970s in Australia,1 as an alternative way to describe languages other than English and Aboriginal languages, in the place of problematic terms such as immigrant language or minority language. It is also used now in Britain for non-English, non-Celtic languages,2 and apparently is used in similar ways in other countries in the West.

No problem with either of these takes (although inevitably there are critiques of any term used to describe any population or its attributes), but it is important I think to note the different frames of reference involved, and value of understanding these in their own contexts.

As far as I am aware, "community language" has not been used much over the last 3 decades in discussing the sociolingistics of multilingual Africa (apart from a brief discussion in a recent book by Tove Skutnabb-Kangas3; I'd be grateful for any other examples). So it might be time to bring it back into discussion. 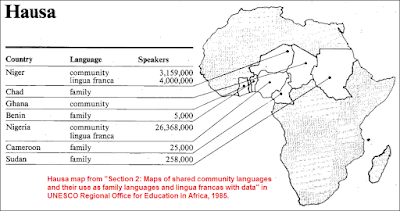 A subcategory of community languages in the survey is "shared community languages" - what are now more commonly called "cross-border languages" (a term used internationally4). Once you look at languages across borders, the type of use in each country becomes a factor in characterizing overall usage. The graphic at the right is an example of what that looks like in the case of Hausa.


The UNESCO document also offers a very clear definition for "national language," a term with multiple uses and that always seems to have a hazy meaning. In general, "national language" tends to be used differently in Africa than in the West, to mean "language of the nation" (of which there may be more than one, but are not the Europhone official languages), rather than "nationwide language." I've discussed this previously in critiques of Ethnolgue's use of the term, in 2013 and 2014, but without reference to the definition from Dar es Salaam, 1979:

In many African countries, one or a number of African languages are given the legal status of "national language" and in a few, all languages spoken indigenously on their territory are included in this category. In short, "national language" in Africa most often can be plural. Contrast with this definition, also from Dictionary.com:

the language spoken and written by the majority of people in a country; also, the official language of a country, recognized and adopted by its government

There are two issues with the latter definition - first, it is incomplete, and second the conflation of "national" and "official." The latter confusion may be common ("official language" being another term with more than one definition and context of application), however in Africa there is most often an explicit distinction with regard to languages between statuses of "official" and "national" that the Dar es Salaam definition reflects.


The differences in how these two terms are used in Africa on the one hand and in the West on the other merit a brief reflection. "Community" in one case seems to be more a matter of joining, where in the other, it is more a matter of setting or being set apart. "National" in one case is more plural, while in the other it is more exclusive. That is not to make a value judgement, but to the extent these impressions are valid, it is a difference with deeper origins and implications.

Also, where there is a difference, the definition used in Africa is less well-known. This issue was already familiar from discussions about meanings of "national language," so I found it of note that there seems to be a similar dynamic in the case of "community language."

Community & national languages as part of a system


Part of what is interesting about the effort begun in Dar es Salaam in 1979 and continued with the UNESCO study in 1985 was that defining terms like community language and national language was not just an exercise in categorizing languages and distinguishing among their use, but more an effort to conceptualize a system of language use in multilingual Africa. This system involved a "five-tier categorization of African languages in relation to development as follows:
This system, as I read it, is one of overlapping layers across which members of a multilingual society move, each with greater or lesser ease depending on education and linguistic portfolio. Outlining it in such a way calls attention to different levels of languages for purposes of planning and development.
At the same time, one could argue that what I have been calling the Western definitions of community and national languages also can be seen as part of a system. But that is a different system, wherein the national language is dominant, and each community language persists among a demographic minority in specific limited areas.


Back on the topic of the PanAfriL10n wiki - I have taken longer than planned to get it to the point where it can be announced formally. The goal is presentability, and to that end some glitches in the transfer had to be corrected, and some features added. In terms of content, some pages needed to be eliminated or rewritten. Full updating will require input from others (another level of challenge), but some updates and additions are more important to the overall product, so they are being done now.

The longer term future of this wiki will depend on a number of factors, but if I'm investing time in it now, it is because there seems to be demand and there is not another resource that does what it attempts to do. More on all that when its return is formally announced.
Notes:
1.  Michael Clyne. 1991. Community Languages: The Australian Experience. Cambridge University Press.
2. Colin Baker and Sylvia Prys Jones, eds. 1998. Encyclopedia of Bilingualism and Bilingual Education. Multilingual Matters. (p. 99)
3. Tove Skutnabb-Kangas. 2013. Linguistic Genocide in Education - or Worldwide Diversity and Human Rights? Routledge.
4. The French language Wikipedia has a lengthy article on this subject - Langue transfrontalière - but at time of access it had very little on Africa.
Posted by Don at 22:25